In 1999 the Yakama Nation and the Columbia River Inter-Tribal Fish Commission (CRITFC) partnered on a project to explore how innovative strategies could improve the successful repeat spawning of steelhead kelts in the Yakima River. The Yakama Nation’s kelt reconditioning program has been so successful that similar programs have been started by the Colville tribe in northern Washington, the Warm Springs tribe in Oregon, and the Nez Perce tribe in Idaho. The tribes started these concurrent programs for the upper and lower Columbia and Snake rivers to explore whether reconditioned kelts could provide additional steelhead to the spawning grounds and aid in steelhead recovery. Steelhead from these rivers are listed as threatened under the Endangered Species Act (ESA). The tribes’ common goal: determine if reconditioning is a useful tool for steelhead recovery in the Columbia River Basin.

Tribal research on wild steelhead kelts includes testing feed types that not only maximize survival but also quicken the rate of re-maturation. The tribes and CRITFC are using new approaches in physiological testing to quantify re-maturation status and to direct the utilization of therapeutics and their applications to increase kelt survival. The tribes’ cutting edge genetic techniques at Hagerman laboratory are able to identify which tributaries in the Snake and Yakima basins are producing the most kelts. Genetic research applications are helping to verify the presence of kelt reproduction in Columbia River tributaries. Research at the Parkdale Fish Facility suggests that kelts are just as reproductively viable as maiden spawning fish. This means that every kelt has the potential to be a valuable contributor to ESA-listed steelhead populations.

It’s the Simple Things That Matter

In kelt reconditioning, it’s the simple things that matter. The most successful method is to provide a nutritious and varied diet as well as minimal interaction with people as the means to rejuvenate the veteran spawners. The Yakama Nation and CRITFC are coordinating with the Chelan Public Utility District. Douglas Public Utility District and the U.S. Fish and Wildlife Service to construct an “isolation building” at the Winthrop National Fish Hatchery in Winthrop, Washington for kelt reconditioning. Not accessible to the public, the facility will reduce fish stress by keeping the surroundings quiet during their reconditioning period. Steelhead kelts are reconditioned through the summer months and returned to the Methow River near Pateros, Washington in the fall so they can spawn again in the following spring. The goal of this program is to increase the number of wild spawners in the Methow Basin by 10%.

To this day, the tribes remain the only fishery managers conducting steelhead kelt reconditioning research in the Columbia Basin. These programs have been successful in discovering which reconditioning strategies and methods work best at decreasing post-spawning mortality and improving re-maturation. The project has shown that reconditioned kelts are reproductively viable and capable of reproducing in the wild. Tribal programs can improve wild steelhead survival by negating mortality caused by crossing as many as nine mainstem dams, predation, and unpredictable ocean conditions. By collecting and reconditioning kelts the tribal programs are acquiring wild steelhead spawners from a group of fish that most likely would have died.

This project demonstrates the tribes’ commitment to Wy-Kan-Ush-Mi Wa-Kish-Wit—the Spirit of the Salmon restoration plan. The tribes’ plan calls for the recovery of steelhead and other culturally important fish resources so that all residents in the Columbia River Basin might enjoy nature’s bounty.

Download a print version of the Steelhead Kelt Success Brochure. 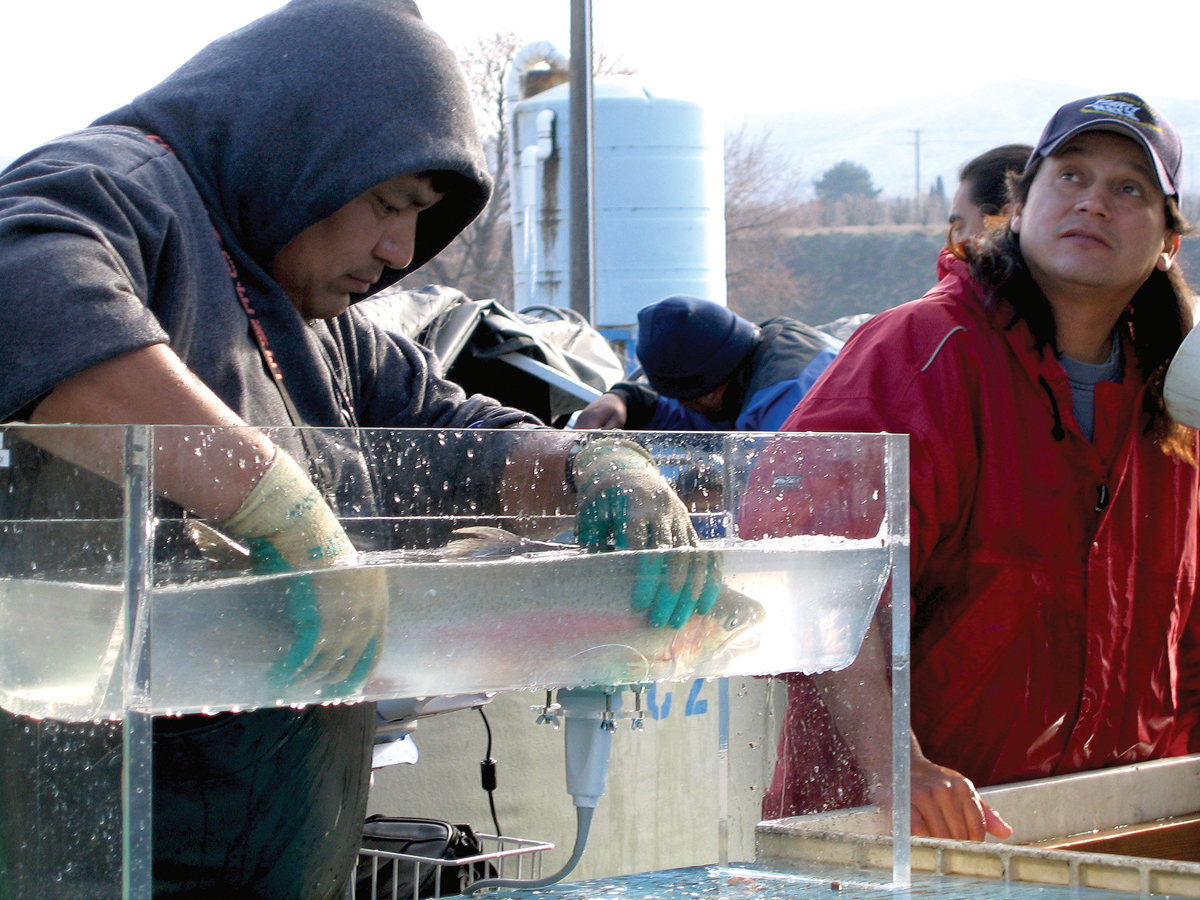 The reconditioning process entails collecting outmigrating kelts in the spring, holding and feeding them until early October, then releasing them into the stream where they were collected as the steelhead run is coming upriver. Kelt reconditioning requires careful feeding regimes enabling kelts to survive and rebuild energy reserves required for repeat spawning. The fish are fed a diverse diet including krill and squid. Adults are treated with antibiotics to help rebuild their immune system and avoid infections. Adult steelhead may be held for 6-9 months until they are released to spawn. 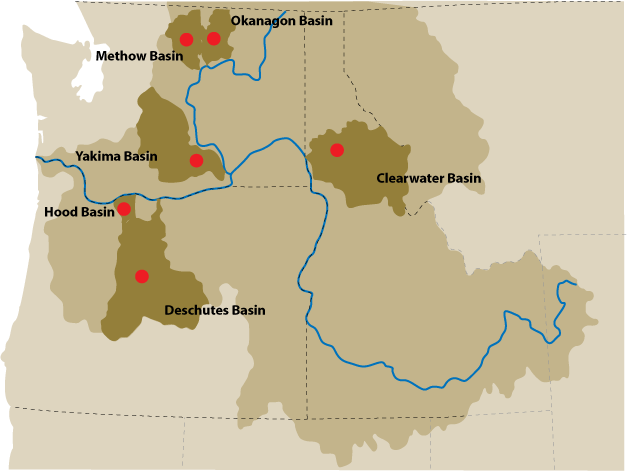 Reconditioning is occurring in these sub basins. The red dots are kelt control release sites. 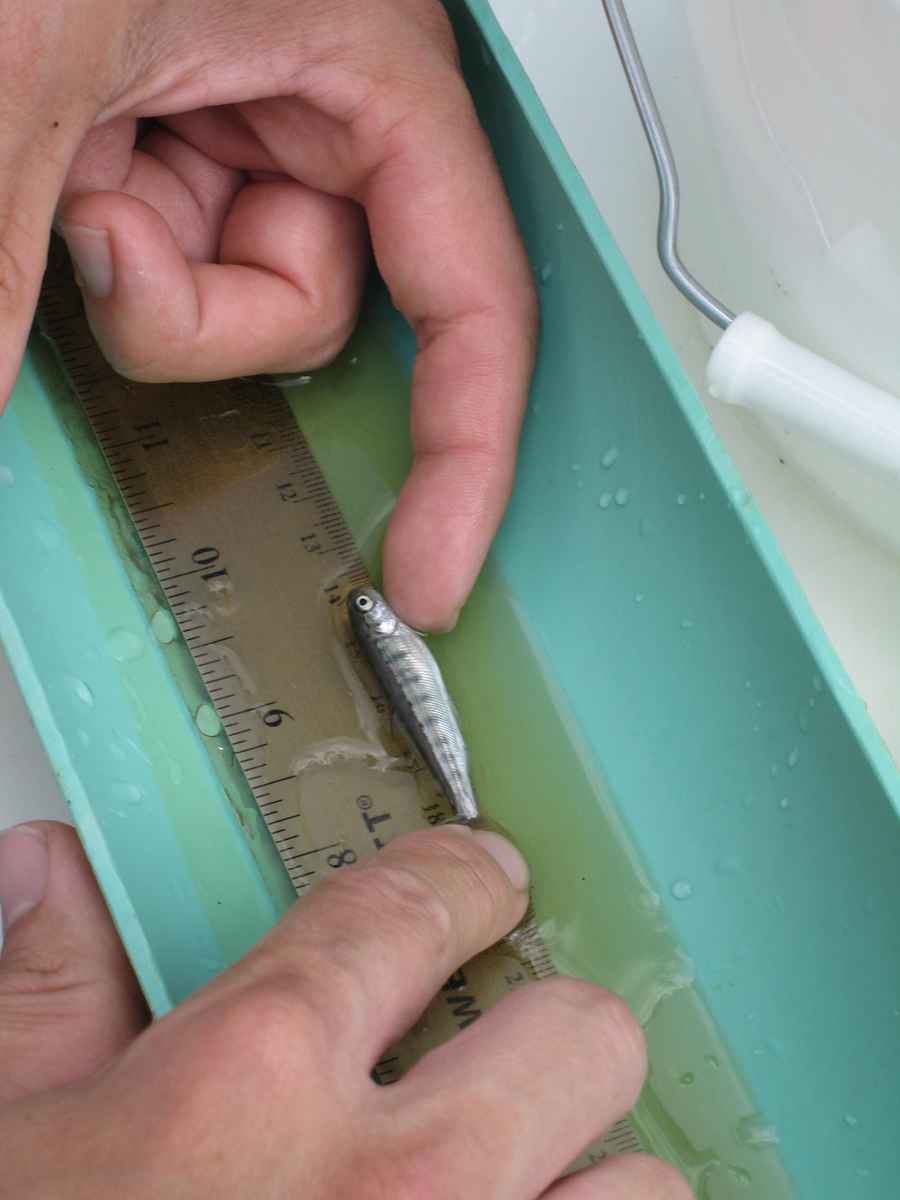 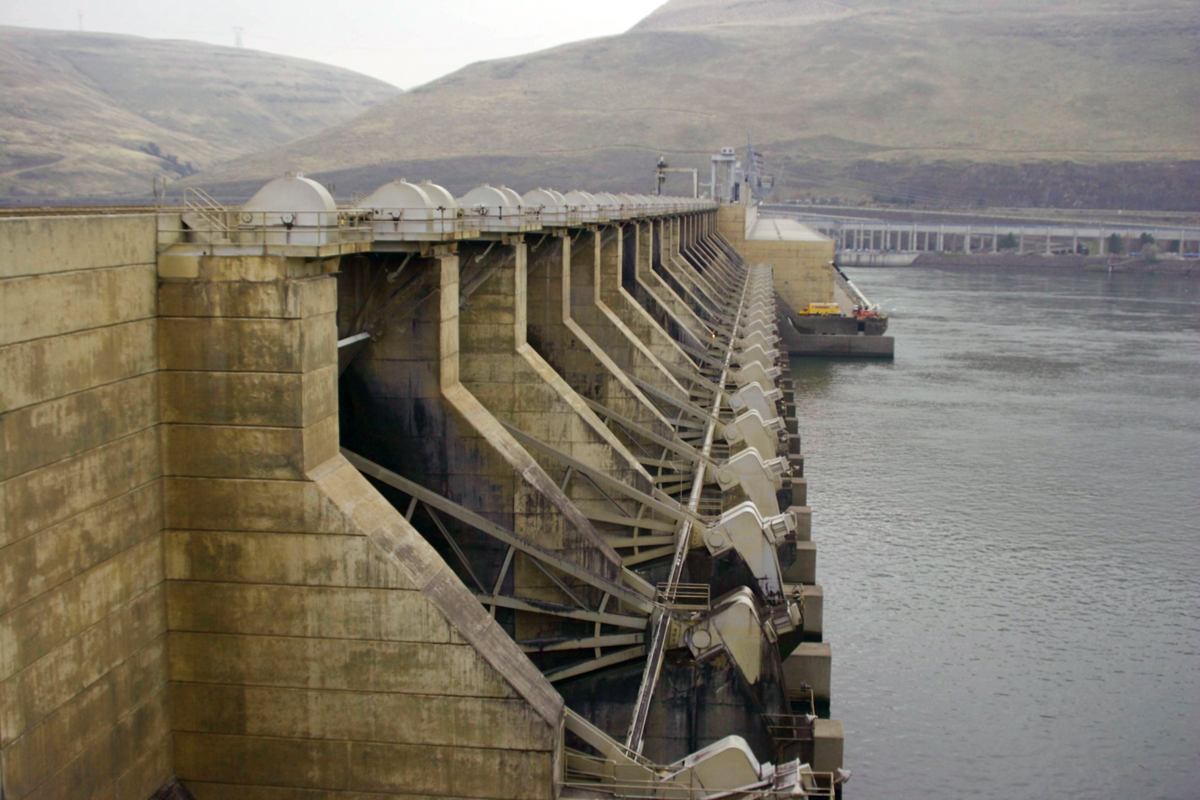 John Day Dam on the mainstem Columbia River. Kelt steelhead have a difficult time passing back downstream through the hydrosystem, and consequently repeat spawning fish are rare.

Download a print version of the Steelhead Kelt Success Brochure.