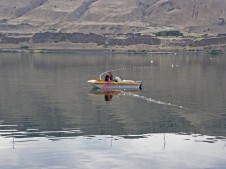 Fishers check their net on the Columbia River.

The Columbia is a river of many uses. Sometimes these different uses inadvertently come into conflict. Fortunately, most of these conflicts can be prevented by knowing what to look for and avoid. Each year during the Indian fishery seasons, fishing nets can be found in the Columbia;  run-ins with fishing gear can damage nets and outboard motors and endanger lives.

To avoid conflicts, learn how to identify fishing nets. Most often, people notice the buoys that are used to secure the nets. These remain in the water throughout the year and are secured to the riverbed. Nets are only attached to them for a few days a week during an active fishery. It’s a safe bet that there will be an Indian fishery from the end of August to the end of September, however other fisheries can open throughout the year. While the nets themselves are not visible, the buoys and floats that hold up the nets are. The nets are stationary and may be attached to shore or anchored in open water. Nets may run parallel or perpendicular to the shore.

Honoring, Protecting, and Restoring the Salmon 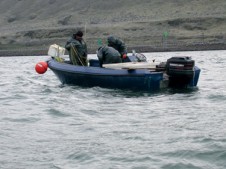 Indian fishers pulling a salmon net from the Columbia River.

Indians have fished, gathered, hunted and lived on the Columbia River for thousands of years. Today, tribal members still fish from scaffolds along the river and with small boats and nets. The United States government agreed to secure the tribal fishery  when the Nez Perce, Umatilla, Yakama and Warm Springs tribes signed  treaties with the United States’ representatives in 1855.  The United States continues to defend the tribes’ fishing rights, which have been affirmed many times by many courts including the U.S. Supreme Court.

Salmon play an integral part of tribal religion, culture and commerce, and of our spiritual and cultural identity. The tribal longhouses and churches rely on salmon for traditional religious services.

Over the years, Indian fishers have had their gear vandalized, their buoys or nets cut from their moorings, or been personally threatened for exercising their treaty right to fish on the Columbia River. In the past, these types of activities were unfortunately the product of intolerance. Nowadays these actions more likely come from the mistaken belief that people are helping the salmon by preventing Indians from catching them. The number of salmon that the tribes harvest is carefully regulated to ensure that enough fish pass through the river system to return to spawn. Pacific Northwest fisheries are co-managed by tribal, federal and state government agencies that coordinate, adopt, and enforce fishing regulations, including domestic and international treaties governing harvest shares. The Columbia Basin’s fisheries managers are also engaged in the world’s largest salmon restoration program, which is rebuilding for returning salmon.