Increased production of sockeye salmon in the upper Columbia River.

Sockeye salmon have declined the most of any Columbia Basin salmonid species since the mid-1800’s. Despite this decline, historically there has been far less done to study, or propagate, this species. This has changed in the past 20 years. Although the bulk of sockeye research and propagation funding has gone towards Snake River sockeye salmon, there has been increasing interest in other sockeye salmon stocks. Despite this interest, and large sockeye runs to the Okanogan Basin in the past two years, much remains unknown about factors limiting sockeye salmon abundance in the Okanogan and Wenatchee basins. In 2006, we began a PSC funded study of upstream passage through the hydrosystem by PIT tagging sockeye salmon at Bonneville Dam. In 2009, funding for this study transitioned to the MOA and an additional project began to study factors limiting abundance of Okanogan and Wenatchee sockeye salmon. This project is particularly timely due to the interest in restoring Okanogan sockeye to subbasin lakes upstream of Osoyoos Lake as well as the lack of response of Wenatchee sockeye salmon to a hatchery program over the past two decades. In addition, mid-Columbia PUDs have sockeye mitigation responsibilities from which we may be able to leverage additional funding. 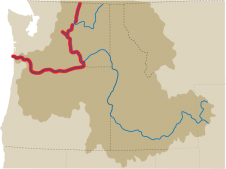 Columbia River to Wells Dam plus Okanogan and Wenatchee rivers

Other collaborators
WDFW, Department of Fisheries and Oceans Canada