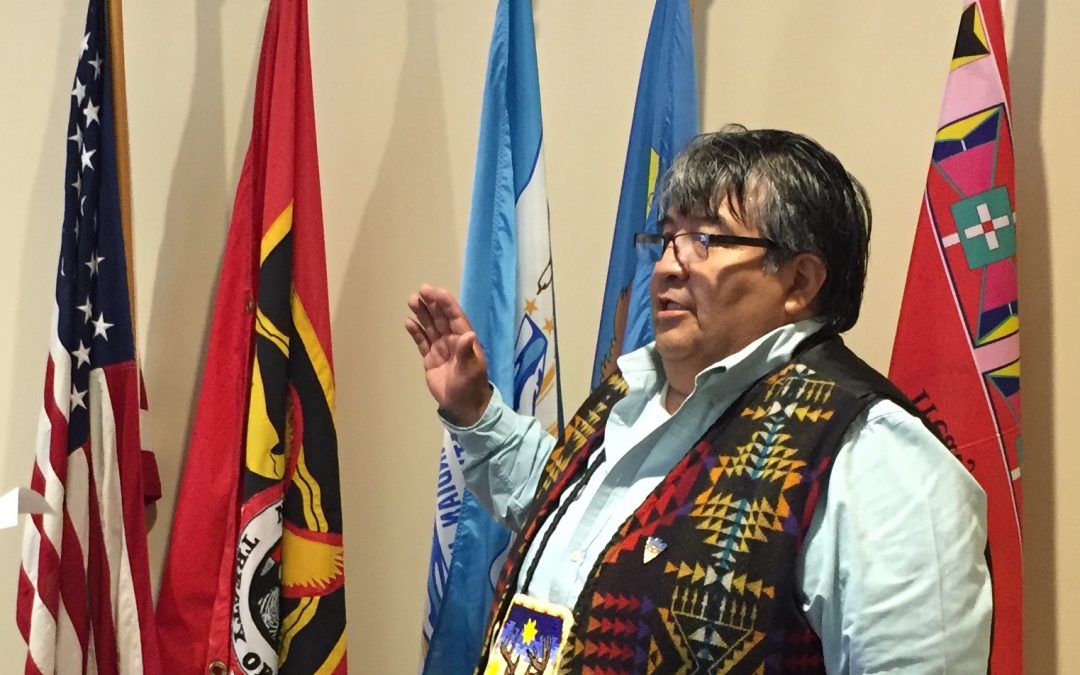 Yakama Nation leader Patrick Luke was sworn in July 28 as the 2016-2017 chairman of the Columbia River Inter-Tribal Fish Commission. He was selected by his peers from the Warm Springs, Yakama, Nez Perce, and Umatilla tribes to lead CRITFC at their June meeting. Mr. Luke brings with him a rich combination of real-life experience and knowledge of tribal treaty rights, fishery and biological understanding, and traditional wisdom. He grew up around the natural resources the tribes work tirelessly to protect, restore, and enhance. He has fished, hunted, and gathered traditional foods throughout the Columbia River basin his whole life. During his childhood, his family fished for salmon and steelhead from scaffolds and boat set nets on the Columbia River. They also gaffed for salmon and harvested lamprey in many Columbia River tributaries. A member of the Yakama Nation’s Tribal Council, Mr. Luke is a strong advocate for treaty fishing rights, salmon, and lamprey.

Mr. Luke’s experience and education has taken him around the world. After high school, Luke enlisted in the United States Marine Corps. Upon completion of his service, he moved to Alaska, living his dream of commercial fishing in Alaska, crabbing and fishing for salmon for over a decade. In 2000, Mr. Luke took advantage of the Department of Veterans Affairs Vocational Rehabilitation Chapter 31 Disabled Veterans Program. Through the program, he enrolled at Blue Mountain Community College and graduated with an Associates of Science Degree and then transferred to Oregon State University Fisheries and Wildlife Program. After graduating from OSU in 2007, Mr. Luke returned to the Yakama Reservation and began working at the Klickitat Salmon Hatchery. He helped develop the first ever Pacific Lamprey Restoration Project Manager position for the Yakama Nation Fisheries Program. He was elected to the Yakama Nation Tribal Council in 2014.

“My vision for the future of Columbia River fisheries is to work towards the restoration of salmon, steelhead, lamprey, suckers, and sturgeon using a well-rounded approach,” said Luke. “If the region is going to return these populations to their historical numbers, we need to diversify our restoration efforts and ask ourselves questions like ‘What does a complete lamprey restoration program look like in the Columbia River Basin?’ or ‘How can we work with the region to modernize the Columbia River Treaty, improve water quality and flow in our rivers and streams and restore habitat?’ These questions must be higher on the region’s priority list because ignoring them only hurts our overall fisheries populations, especially survivorship.”

Luke assumes the position from Jeremy Red Star Wolf (Umatilla) who took over from Kat Brigham in January. The leadership of the Umatilla Tribe over the past year has guided the CRITFC through a number of changes. The tribes have waded into key battles against reckless coal and oil transportation projects, secured important advancements of housing for tribal members living along the Columbia River, and saw a record number of fall chinook return to the Columbia River.

“I would like to thank the Columbia River Inter-Tribal Fish Commission membership and staff for their vast support in my short term as Commission Chair. Reigniting old friendships and gaining new ones has been a pleasure. Watching and hearing old and new knowledge being shared between our four tribes and CRITFC staff and then with local people and agencies all the way to Washington D.C. has been inspirational. The importance of our treaty-reserved rights and our resources that cannot speak for themselves is clearly evident in the passionate deliberations and contributions I have witnessed during my tenure. From the CRITFC staff to the Commissioners to individual fishermen, they all made my role much easier than I expected,” said Jeremy Red Star Wolf “Xitsew-Ilp-Ilp,” retiring chair.

“Still, there are great duties and challenges ahead: the Columbia River Treaty, U.S. v Oregon, Pacific Salmon Treaty, the Accords, seasonal harvest goals, big oil, railroad safety, and climate change to highlight a few. All serve as affronts to that which we protect and enhance. I am confident in the abilities of our leadership to further our common goals and to see that the next seven generations has a chance- a chance to provide their own leadership to retaining tribal treaty rights and further protecting and enhancing the First Foods. The CRITFC leadership baton continues its circle through the four treaty tribes to the Yakama Nation. I have full confidence in our next chairman, Patrick Luke, to guide us in retaining and enhancing all that we hold dear. I have known Patrick since I was a young boy and have looked up to him as a participant and protector of that which we fight to retain. I look forward to our future, confident in the power of our passion and capabilities,” he added.