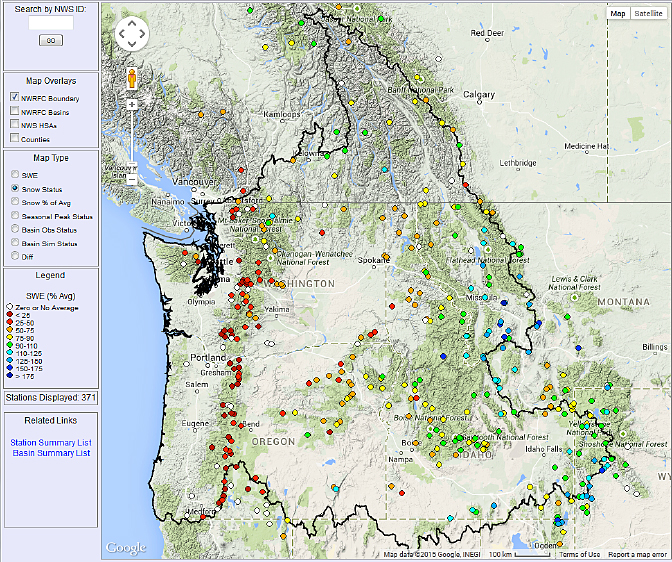 Despite off-and-on rain and snow since October, Columbia River basin weather patterns are coming back to normal, although it is still a little on the warm, dry side. In general, mountain snow stations show the water contained in Oregon and Washington snowpacks is 2″ to 5″ below normal while the snowpack of Idaho and western Montana is near (or slightly above) normal. When the snow melts in spring, this runoff feeds the river flow, which helps the fish migrate down the river and out to the ocean. 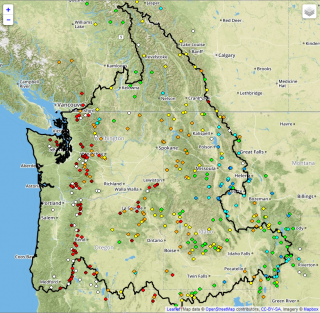 This map shows snow status for the Pacific Northwest as of 26 Jan 2015. The situation is similar to last winter where the region started off dry then quickly made up the lack of moisture during the late winter and spring months. Red, orange, and yellow dots indicate snowpacks below normal. (The darkest red, representing a snowpack less that 25% of normal is seen all along the Cascade Range.) Green indicates normal snowpack, and turquoise through dark blue indicate above average snowpack. (The darkest blue, representing snowpack greater than 175% of normal, is seen in several areas of the Rocky and Bitterroot mountains in the upper basin.)

Snowpack, along with monthly and seasonal precipitation and current river flow, are the key components that are used to calculate the year’s Water Supply Forecast (WSF). This forecast is used by water management agencies, such as the U.S. Army Corps of Engineers and the U.S. Bureau of Reclamation, and determines how much water is released for power, irrigation, and fish. The latest CRITFC water forecast is that the Columbia River at The Dalles will be 96% of normal for the April-July runoff period. (NOAA estimates 94%.) Current ocean and atmospheric indicators suggest that we are in a weak El Niño pattern, which means the region will see a tendency for warm, dry winter conditions.