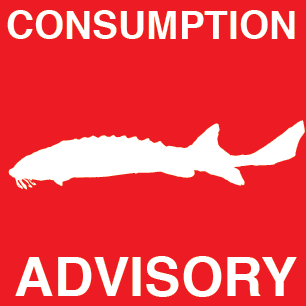 On September 23, 2013, the Oregon Health Authority and Washington State Department of Health have issued two fish consumption advisories for RESIDENT FISH in the Columbia River due to high to moderate levels of mercury and PCBs (polychlorinated biphenyls). This advisory is to limit people’s exposure to these toxic substances that have been found in fish that live year-round in these stretches of the Columbia River. The advisory applies to sturgeon, carp, bluegill, sucker, smallmouth bass, largemouth bass, yellow perch, crappie, walleye, and catfish. The advisory does not include migratory fish (salmon, steelhead, and lamprey). These are a healthy choice from the Columbia River.

Babies, children, and women who are pregnant, planning to become pregnant, or are nursing should take extra efforts to follow this advisory. The health effects on developing fetuses, babies, and small children of eating contaminated fish can include lifelong learning problems and cancer.

The tribes are well aware of the situation and have been working to address the cause, which is water pollution. The tribes believe that the long-term solution to this problem isn’t keeping people from eating contaminated fish—it’s keeping fish from being contaminated in the first place.

In the Bradford Island area (near Bonneville Dam), people should not eat resident fish at all. Read the entire advisory on the Oregon Health Authority’s website here» 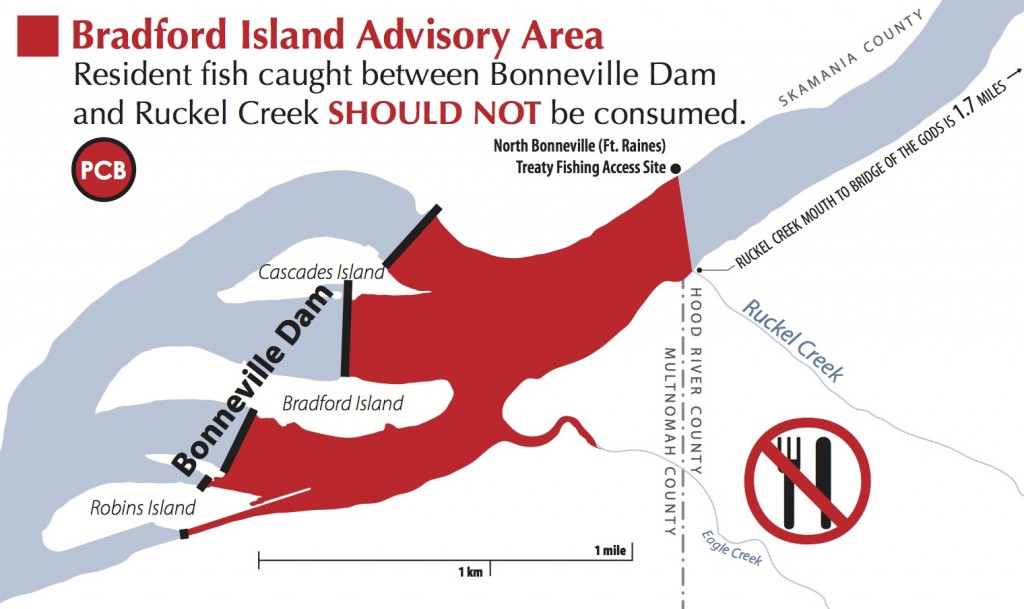 Ruckel Creek to McNary Dam (150 miles), fish consumption should be limited to one meal per week of resident fish. Read the entire advisory on the Oregon Health Authority’s website here»

Q: What fish are included in the advisory:

Resident fish that spend their entire lives in the area. This includes sturgeon, bass, crappie, walleye, carp, catfish, and suckers.

Q: What fish ARE NOT INCLUDED in the advisories?

Migratory species like salmon, steelhead, American shad, and lamprey are not affected by this advisory, and are considered a healthy source of protein, omega-3 fatty acids, and other nutrients.

The people most susceptible to PCB and mercury health effects are small children, nursing babies, and pregnant women. It’s particularly important that pregnant and nursing women follow the advisory advice to protect their unborn fetuses or nursing children.

One “fish meal” is 8 oz. uncooked or about 6 oz. cooked for a 160 lb. adult, which is approximately the size of the palm of your hand. Add or subtract one ounce to the serving size for each 20 lb. difference in body weight. For example, the serving size for a 20 lb. child is just 1 oz. Click here for more guidance on fish meal sizes»

Q: Can the contaminants be reduced by proper cleaning or cooking?

PCBs build up in the fat of fish and can be reduced by 1) Removing the skin, fat, and internal organs before cooking; 2) Grill, bake, or broil fish so that the fat drips off while cooking; and 3) Eat younger and smaller fish (within legal limits).

There is no way to reduce mercury by cleaning or cooking because it builds up in the fish’s flesh.

Q: What are the health impacts of consuming mercury?

Mercury can harm the central nervous (brain) and immune systems. If a baby or fetus is exposed to high levels of mercury, the child may develop lifelong learning and behavioral problems. A fetus or child is more sensitive to mercury than an adult. If a person is exposed to mercury over time, it can harm organs including the kidneys and heart.

Q: What are the health impacts of consuming PCBs?

PCBs consumed at high levels can impact men and women of all ages. PCBs may cause a variety of health problems depending on the amount a person is exposed to. A baby or fetus exposed to high levels of PCBs may have lifelong learning and behavioral problems. PCBs may also affect the immune and reproductive systems, thyroid hormones, and cause cancer.

Q: What is the basis for the advisories?

The joint fish consumption advisory for the middle section of the Columbia River is due to elevated levels of mercury and polychlorinated biphenyls (PCBs) in fish tissue. Mercury contamination is the result of a number of sources but primarily coal-fired power plants, incinerators, and cement plants. The problem can be compounded by the hydroelectric system, where low oxygen levels behind reservoirs can alter the mercury compound chemically to a form that allows it to accumulate in fish tissue.

PCBs are long-lived pollutants that have entered the environment through use or improper disposal. The chemicals were widely used prior to 1979 as insulating fluids for electric transformers, capacitors, and electric motors. The contamination around Bradford Island is the direct result of the Corps of Engineers’ improper disposal of electrical equipment that was buried on the north end of Bradford Island.

PCB production was banned in the U.S. in 1979, yet fish across the country are still contaminated by PCBs because they are very stable compounds that do not decompose and are easily incorporated into fish tissues, which tend to accumulate along the food chain.

Q: How did the mercury and PCBs get into Columbia River fish?

Once mercury and PCBs get into the water, they settle into the sediment. The contaminants get consumed by bacteria, insects, and other small bottom-dwelling organisms that fish eat. When fish eat these organisms, the contaminants are absorbed into the fish’s flesh and fat rather than passing out of the fish as waste. Over time, the amount builds up to toxic levels. The bigger and older a fish is, the more likely it is to have eaten lots of smaller, contaminated organisms.

Q: Have tribal staff reviewed the findings and the advisories?

Yes, CRITFC water quality staff and some tribal staff have reviewed the data and its findings and they appear to be sound.

Q: How were the advisories reached?

DEQ and EPA collected numerous fish samples from the 150-mile section between Ruckel Creek and McNary Dam in 2009. Those samples underwent analysis by the State of Oregon and became the basis for these advisories.

Q: Why did it take so long?

Fish testing analysis is usually a very lengthy process because of the intricacies involved as well as the volume of testing across the state. Oregon Health Authority didn’t receive the Ruckel Creek to McNary Dam data until 2012, and then conducted its own review of the results. They then began notifying the tribes in July 2013 once advisories appeared necessary.

Q: What are the tribes doing to address this?