California Sea lions above Bonneville Dam to be trapped 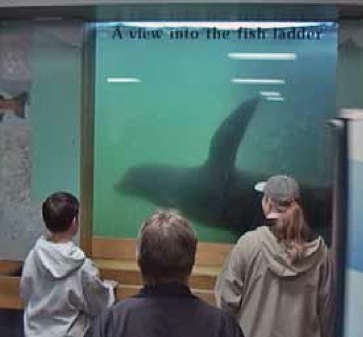 A California sea lion resting near Boat Rock, one of the outcroppings in the Columbia River just upstream of Bonneville Dam.

The Oregon Department of Fish and Wildlife is operating the trap, but trapping is being done in coordination with tribal fishery managers. The trap was deployed on April 17 at The Dalles Marina. The trap needs to be deployed in an area where sea lions haul out. There have been at least three sea lions that have been hauling out at The Dalles Marina. Trapping also needs to be done where the trap can be kept secure and where sea lions can be removed from the trap for transport. The Dalles Marina also meets this requirement. Once trapped, each animal will be removed from The Dalles area and later examined for brands or natural markings. These markings determine if the animal is on the list for removal. Unknown or unmarked animals will be branded and released into the Columbia River below Bonneville Dam. Marked animals on the removal list will undergo a health assessment and, if found healthy and meeting a series of health criteria, could be considered for transfer to the Queens Zoo in New York. All marked animals on the removal list are subject to possible euthanasia. There are plans to install another trap possibly in the Stevenson area. Fishers should be aware that there is no guarantee trapping will be successful. It may take a long time to catch the animals. There may be logistical limits that prevent trapping in all areas where problem sea lions are. Fishers are encouraged to continue to report sightings of sea lions. We recognize the frustration of fishers, but these reports have helped a great deal in getting support for trapping efforts. Call CRITFC Enforcement (800) IT’S FISHY if you spot a sea lion in Zone 6 stretch of the Columbia River. Fishery managers are especially interested in locations where sea lions haul out as it may be possible to trap them in these locations. By compiling as much data about the size and nature of the sea lion problem, the tribes hope to have more information to come up with an effective and suitable solution. For information on non-lethal hazing techniques from NFMS, please visit: bit.ly/hazingmethods.