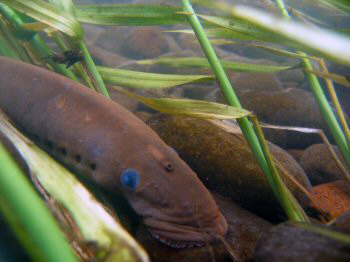 Pacific lamprey were front and center at the two-day Lamprey Summit III in June. Hosted by CRITFC and the US Fish and Wildlife Service, the summit focused on Pacific lamprey issues along the entire West Coast and brought together over 200 biologists, managers, executives, tribal officials, and policy level staff for candid conversations on lamprey and the steps necessary to restore the ancient fish.

“Eels have always had a significant role in our tribal communities. The significance to our culture and their decline is something the region cannot ignore,” said CRITFC chairman Gerald Lewis. “The region has a responsibility to help care for these creatures and time is running out. We can’t afford to lose them from our ceremonies or our watersheds.”

During the two-day summit, participants from Idaho, Oregon, Washington, and California discussed the current status of lamprey populations, on-going efforts to conserve and restore lamprey populations collaboratively, and explored regional approaches for implementing lamprey restoration actions. Many entities at the lamprey summit expressed firm commitments to lamprey conservation actions. Some signed a conservation agreement while others signed letters of support for the actions.

“At the first lamprey summit eight years ago, the tribes put the Pacific Northwest on notice that lamprey populations were in trouble. We sounded the alarm,” explained CRITFC executive director Paul Lumley. “By the time the second lamprey summit came around in 2008, we needed more. We needed commitments—commitments for restoration. Now, for this summit, we need to move forward with real commitments and on-the-ground actions. Lamprey populations simply cannot wait any longer.”