Future of Our Salmon Conference 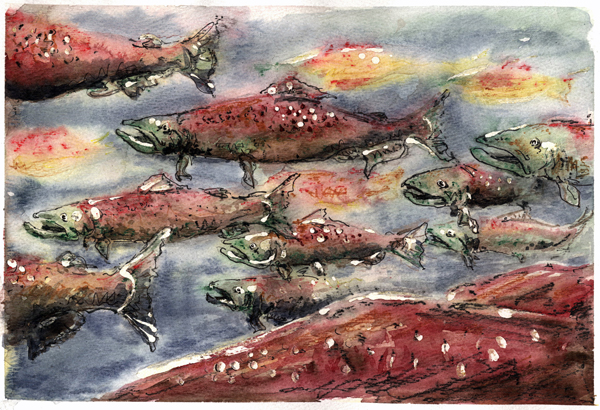 We are all Salmon People.

The Columbia Basin is home to numerous tribal nations on both sides of the US/Canada border. They all have long known that the actions and decisions of one group can impact and influence those who live both upstream and downstream. The understanding of this shared impact and responsibility to the natural resources of the region is one of the reasons that CRITFC hosts the biennial or triennial Future of Our Salmon Conference. The conferences gather together tribal nations, federal and state agencies, and NGOs from throughout the Columbia—from the upper reaches of the Columbia River in British Columbia to the Snake River headwaters in Yellowstone National Park to the mouth of the Great River as it empties into the Pacific Ocean. Our health and fate are linked to the health and fate of the waters of N’Chi Wana—the Big River.

One tribal creation myth recounts how right after Salmon promised his body to feed the humans, Water spoke up and offered himself to be the home to Salmon. Not only is water a central part of Columbia Basin tribal religions and cultures, it is fundamental for life on earth. Protecting and restoring water is perhaps the most important aspect of protecting and restoring the Columbia River salmon. No one group can completely restore salmon alone, but the power of wy-kan-ush (sacred salmon) is reason for hope.

The world over, salmon affect the cultures of the people in which they come in contact. The wildly different traditional cultures of Japanese Ainu, Pacific Northwest Coastal tribes, the Norwegian coastal areas, and the Russian Far East each have salmon returning to their lands and each share a reverence and gratitude for the bounty that salmon provide. The modern Pacific Northwest is no different. Salmon have shaped the culture of the newcomers to this region just as they shaped tribal cultures before them. Salmon are the icon of this place. They are valued as food, as a resource, and as a representation of the wildness and wilderness for which the Pacific Northwest is known. They shape our land use policies and power grid. Whether they realize it or not, every single person in the Northwest is a Wy-Kan-Ush-Pum. We are all Salmon People.

Proceedings and materials from past conferences: