Welcome to the Crosswalk!

This web site has links to two online mapping tools and a fish names query system, which provides access to geographic and descriptive information on fish populations (pop/units) of salmon and steelhead as defined by state and federal agencies, tribes, and regional projects in the Columbia Basin. Many fish managers in the region have devised their own naming schemas for these pop/units and the schemas may not be consistent among the fish managers. Other inconsistencies may include differences in: descriptions of runs, pop/units groupings, geographic mapped areas, and which pop/units are recognized by a managing agency. Using the tools found on this web site, fish managers can crosswalk their organizations’ pop/unit boundaries with the pop/unit boundaries of others and determine if the data collected and reports written describe the same pop/unit. For an in depth description of the project, see the Final Report or the original Project Proposal.

There are four ways to query and receive information on pop/units including:1.Species Maps, 2. HUC6 Maps, 3. database query system that returns pop/unit names by fish manager (data source), and 4. REST endpoint. Several maps and the query tool can be opened at the same time in different tabs for comparing.

The mapping applications user guide has been created to explain the tools and how to use them. 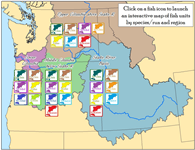 Species Maps – Currently this map is offline for future upgrades. The tabular data can still be accessed in the Population Query tool and the spatial data can be accessed at https://gis.critfc.org/arcgis/rest/services. This interactive mapping tool displays the whole boundary for each pop/unit defined by agency or regional project, based on HUC6 subwatersheds. Additionally, view data reported with each species within the pop/units. The pop/units are grouped by species (Chin = Chinook, Sthd = Steelhead, Sp = Spring, Su = Summer, Fa = Fall, Wi = Winter) within four regions in the Columbia Basin (Lower Columbia – below Bonneville Dam, Middle Columbia – between Bonneville Dam and the Snake River, Upper Columbia – above the Snake River, and the Snake River).

HUC6 Map – Currently this map is offline for future upgrades. The tabular data can still be accessed in the Population Query tool and the spatial data can be accessed at http://gis.critfc.org/arcgis/rest/services. This interactive mapping tool displays the boundaries of 6th level Hydrologic Unit Code (12 digit Subwatersheds) within the Columbia Basin that are associated with a pop/unit of salmon or steelhead. The selection of any one of the HUC6s will return a report of all species and pop/units names and tabular data that are linked to the subwatershed.

Population Query – Using this tool, one can query the pop/units database to return a list of pop/units that meet select criteria (such as sharing a mapped area) . Links are provided to view reports containing the pop/units attributes and HUC6 list of geographic extent.

The project has a variety of pop/units collected and converted to be used with the national Watershed Boundary Dataset (WBD). The WBD is a fairly new hydrological boundary dataset and therefore not all of the spatial datasets on pop/units used by managers that used the old hydrological data have been converted to the WBD. Other datasets from some of the agencies or tribes also needed to be transferred from line work of stream/river distribution to the polygons of the WBD for use in this project.

The fish pop/unit data are accessible directly as map services through a REST endpoint, for users who wish to add them to their GIS, instead of querying them with the tools listed above. The REST endpoint address is: http://gis.critfc.org/arcgis/rest/services. The populations are first separated as distinct map services by regional geographic area and species/run, and then as distinct layers by data source and local geographic area.

Listed below are a set of acronyms and information for Columbia Basin processes or agencies and tribes that provided data for this project. The acronyms will appear in the Source field within the Fish Units Subwatershed report that is generated when the ID tool is used on a HUC6 to identify the fish units that are associated with a HUC6/Subwatershed.