Appearing in the fossil record 450 million years ago, Pacific lamprey are the oldest fish found in the Columbia River system. A significant subsistence and cultural resource for tribal communities, Pacific lamprey numbers have plummeted in recent years. Once retuning to the Columbia River and its tributaries by the millions, approximately 48,000 returned to Bonneville Dam in 2011. Lamprey returns were at an all-time low of 23,000 in 2010.

An important component to the Columbia Basin ecosystem, Pacific lamprey are significant prey for a number of other species, provide marine nutrients to tributary ecosystems and are often viewed as the “canary in the coal mine” for ecological challenges facing other species like salmon.

The most inclusive plan for Pacific lamprey to date, the plan looks to halt the decline of lamprey by 2012 and reestablish lamprey populations throughout the mainstem Columbia River and its tributaries. The plan seeks to improve mainstem and tributary passage for juvenile and adult lamprey, restore and protect mainstem and tributary habitat, reduce toxic contaminants, and consider supplementation programs to aid re-colonization throughout the basin. 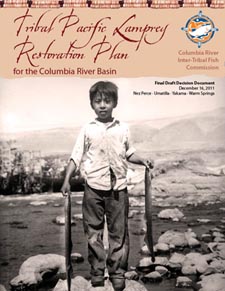