These pages are designed to provide our tribal leaders and staff with information on how climate change may affect their tribe’s natural resources during the 21st century. Scientific research and data listed here project the effects of climate change in the Columbia Basin, including overviews of the issue and its effects, and projected impacts to water and terrestrial resources and fish and wildlife.  Also listed are tools and recommendations to assist with climate change vulnerability assessment and adaptation. The threat of climate change is significant to the water, land, and native species of the Columbia Basin. The members of the Columbia Basin Indian Tribes are uniquely vulnerable to these effects because they are intimately tied to their traditional hunting and fishing grounds to gather their “first foods”, which have immense importance to their economic, cultural, and spiritual well-being.

Stefanie Krantz. Climate Change What Can We Do? Presentation

Graves D and A Maule. 2014. A stakeholder project to model water temperature under future climate scenarios in the Satus and Toppenish watersheds of the Yakima River Basin in Washington, USA. Climatic Change 124:1

(The last two articles were published in Ecological Restoration 27:3)

Overview on Climate Change and the Pacific Northwest

Mote P et al. 2014. The Northwest.  Chapter 21 in the US National Climate Assessment

Dalton M et al. 2013. Climate Change in the Northwest: Implications for Our Landscapes, Waters, and Communities

Effects on Hydrology and Water Temperature

A new set of hydrologic climate change scenario projections were completed at the University of Washington in partnership with regional water management agencies in the Fall of 2017. The Columbia River Climate Change Project includes results from low (RCP4.5) and high (RCP8.5) emissions scenarios and multiple global climate models, downscaling methods, and hydrologic models in order to produce a robust range of future projected changes to river flows at 396 different sites throughout the Pacific Northwest. We recommend that tribal staff use these updated projections for hydrologic or water resource studies that require estimates of future river flows.

Boise Aquatic Sciences Lab, US National Forest Service (2013) NorWeST Stream Temp Regional Database and Model.  The NorWeST webpage hosts stream temperature data and climate scenarios in a variety of user-friendly digital formats for streams and rivers across the western U.S. The temperature database was compiled from hundreds of biologists and hydrologists working for >100 resource agencies and contains >150,000,000 hourly temperature recordings at >20,000 unique stream sites. Those temperature data were used with spatial statistical network models to develop 30 historical and future climate scenarios at 1-kilometer resolution for >1,000,000 kilometers of stream.

Effects on Salmon and other Fish and Wildlife

Effects on Forest and Vegetation

The Nature Conservancy’s Terrestrial Resilience Density.  Project to identify the most resilient sites in the Northwest that will collectively and individually best sustain native biodiversity even as the changing climate alters current distribution patterns.

Climate Adaptation Knowledge Exchange (CAKE) A Shared Knowledge Base for Managing Natural and Built Systems in the Face of Rapid Climate Change.

Working with Beaver to Restore Streams, Wetlands, and Floodplains. 2015. The Beaver Restoration Guidebook

CRAVe (US Geological Survey) Climate Registry for the Assessment of Vulnerability

Center for Science in the Earth System, University of Washington Climate Impacts Group. 2007. Preparing for Climate Change: A Guidebook for Local, Regional, and State Governments.

Principals for Salmon Habitat Restoration in an Era of Climate Change 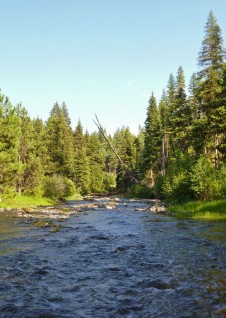