Portland, Oregon –Dr. Zachary L. Penney, a member of the Nez Perce Tribe, has been selected to lead the Fishery Science Department of the Columbia River Inter-Tribal Fish Commission. He will begin his new job on March 2, 2015.

Dr. Penney will manage CRITFC’s largest department, consisting of 45 scientists and support staff located in the Portland office, the Hagerman Genetics Lab in Idaho, and a research cooperative with the University of Idaho in Moscow. The Fishery Science Department is tasked with increasing the scientific knowledge about Columbia Basin fish and the habitats upon which those fish rely. The department conducts valuable research that informs tribal, state, and federal management agencies, their programs and their management responsibilities. Dr. Penney will be responsible for increasing the visibility of tribal scientific accomplishments and planning, implementing, and improving technical projects and programs throughout the Columbia River Basin.

Dr. Penney has a Ph.D. in Natural Resources from the University of Idaho and an extensive background in fisheries management and policy. His experience includes work with tribal agencies, federal agencies, and academia. For the past year, Dr. Penney has been serving as a NOAA Sea Grant Knauss Fellow in the office of Representative Huffman (CA-2) in the House of Representatives in Washington D.C.

“Growing up, my parents and elders instilled in me the importance of fishing and education,” said Dr. Penney. “I’m excited to bring these passions to benefit the Columbia River Treaty Tribes and culturally-significant species like salmon and lamprey. Tribal culture tells us why salmon are important, and science can tell us how to best help them. As we further the scientific understanding of fish and the habitats in which they live, we can improve the recovery efforts of Columbia Basin salmon.”

“The CRITFC organization is thrilled to have Dr. Penney as a member of our management team,” said Paul Lumley, CRITFC’s executive director. “His energy and passion for fisheries will be a great asset in the tribes’ efforts to put fish back in the rivers and restore the watersheds where fish live.”

In addition to his Ph.D., Zachary Penney has a Master’s of Science in Earth and Ocean Sciences from the University of Victoria and a Bachelor of Science in Aquatic Resources from Sheldon Jackson College.

Dr. Penney succeeds Phil Roger who retired from CRITFC after 34 years of service. 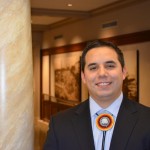