Portland, OR-The impacts of climate change on tribal natural and cultural resources are taking center stage in a newly released Special Issue of the journal Climatic Change1 (Vol. 20, Issue 3). Released on-line on September 15, 2013, this is the first time a peer-reviewed scientific journal has exclusively devoted an entire edition to climate change and its impacts on indigenous communities across the United States.

A collaborative effort by over 50 authors representing tribal communities, academia, government agencies and NGOs resulted in this Special Issue, which explores issues currently experienced by indigenous communities in the U.S. due to climate change including loss of traditional knowledge, forests and ecosystems, food security and traditional foods, water, Arctic sea ice, permafrost thaw, and relocation. The issue also highlights how tribal communities and programs are responding to the changing environments.

Columbia River Inter-Tribal Fish Commission Hydrologist-Meteorologist Kyle Dittmer is one of the contributing authors to the Special Issue. His research focuses on a historical perspective of changing timing and volumes of stream flows on tribal lands throughout the Columbia Basin.  He is also a co-author of another paper in the Special Issue that assesses water resources across all the tribal lands of the United States and specific cultural impacts.

With a long history and deep connection to the Earth’s resources, indigenous peoples have an intimate understanding and ability to observe the long-term impacts from climate change. Traditional ecological knowledge and tribal experience plays a key role in developing future scientific solutions to adapt to the impacts.

“The Special Issue reminds us that the damaging effects of climate change is a global phenomenon that fails to recognize political nation-state boundaries,” said Prof. Dan Wildcat, Haskell Indian Nations University and contributor to the Special Issue.  “The partnerships between tribal peoples and their non-tribal research allies give us a model for responsible and respectful international collaboration that will be essential to successfully mitigate the most damaging effects of climate change that have yet to arrive. Climate change and this Special Issue remind us that, as my Lakota relatives say, ‘We are all related.’ That might be the wisdom we need most whether scientist or non-scientist – Indigenous or non-Indigenous.”

“Our first foods are beginning to suffer the impacts of climate change,” said Joel Moffett, chairman of the Columbia River Inter-Tribal Fish Commission. “Salmon are returning later and our first salmon feasts are being pushed back because of these later runs.  It is nice to see the scientific community recognizing tribal knowledge and observations surrounding climate change.”

To view the special issue of Climatic Change, visit:  http://bit.ly/tribal-climate 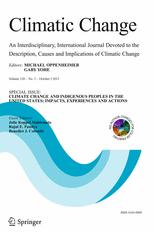 To view the special issue of Climatic Change, click here»