Unsightly but Harmless Virus Spotted in Some Chinook 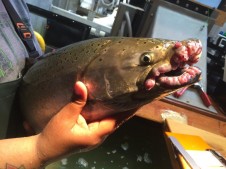 A chinook salmon with the virus. This fish was caught at Bonneville Dam by CRITFC technicians doing sampling work. Photo courtesy Jayson FiveCrows.

Fishers this spring have reported catching salmon that appear to be healthy except for lumpy and deformed jaws and mouths. Ken Lujan, microbiologist with the Lower Columbia River Fish Health Center, revealed the culprit: a virus that causes coldsore-like growths on fish’s mouths. It is sometimes called “kissing disease” by fish pathologists. The effects of the virus is restricted to the head and jaws of the fish and does not affect the meat quality. The virus has no effect on humans. This particular strain seems to be restricted to spring chinook from the Grande Ronde Basin.

If fishers catch fish with unusual features or appear to be diseased, the Lower Columbia River Fish Health Center is very interested in seeing those fish and getting samples. They can even come to the river to collect specimens from suspect fish. Fish Health Center biologist Susan Gutenberger asked fishers with specimens to keep the fish fresh, on ice, and most importantly not to clean them.   The Center will keep the fish cold and can return the fish to the fisher after the samples have been collected. Contact the Lower Columbia River Fish Health Center at (509) 538-2400 and ask for Ken or Susan.