The tribes are in the process of planning the upcoming spring season fisheries. No final decisions have been made yet. There will be discussions of all aspects of spring fishing including the Ceremonial Permit fishery, the Zone 6 platform fishery, commercial gillnet fishing, fishing downstream of Bonneville. Commercial sales will certainly be part of these discussions as well. The relatively low allowed harvest rates and run sizes (that are not as big as we would like) do present challenges in giving fishers all the spring fishing opportunity that they would like. 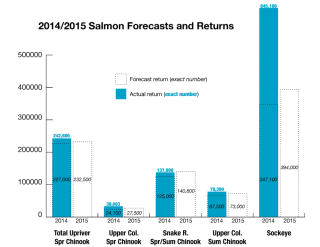 The forecast is for a run similar to 2014. Both treaty and non-treaty fisheries are managed based on the same actual river mouth runs sizes. We won’t have a great deal of certainty about the actual run sizes until early May with the first run size updates. If the run comes in near forecast, total catches in the spring will probably be similar to last year. The run could be larger or smaller than forecast. As seen in the graph, last year’s forecast matched the actual return quite well (with the exception of sockeye), however this early in the season it is hard to predict how the fisheries will go.