Since Oct. 1, the start of the new water year, it had been very dry across the Pacific Northwest – even though there were no indicators beforehand. From mid-November onward, moderate-to-major storms helped to increase rainfall and snowfall in the mountains. Although the Cascade Mountains were running at only 25-50% of normal snowpack, the Upper Columbia Basin was doing reasonably well: 90-110% of normal. During January through the first week of February, major storms dumped substantial snowfall in the Cascade Mountains and the Upper Columbia Basin.

Ocean and atmosphere indicators suggest we are in an “ENSO neutral” event where Pacific Northwest winters are near normal temperature and precipitation but have highly variable daily weather, which is exactly what has occurred. This means that the amount of spring snowmelt runoff will be near normal. This runoff feeds the river flow which helps the fish migrate down the river and out to the ocean. North Pacific Ocean conditions are favorable for salmon survival now due to enhance coastal upwelling.

The figures below show the current state of the region’s snowpack. Current snow level is at 1500 feet. The pattern is extraordinary: the Washington/Oregon Cascades have gone from way below normal (25-50% of normal) to at or above normal (100-125% of normal) in just four weeks – effectively erasing the effects of three months of drought (Oct.-Dec. 2019). More storms are moving in now which are expected to build up more snowpack even more.

Snowpack, along with monthly and seasonal precipitation and current river flow, are the key components that are used to calculate the seasonal water supply forecast. This forecast is used by water management agencies – U.S. Army Corps of Engineers, BPA, and the U.S. Bureau of Reclamation – to determine how much water is released for power, irrigation, and fish. The latest CRITFC water supply forecast: Columbia River at The Dalles is 95% of normal for the April-July runoff period. NOAA’s forecast (April-July runoff) is 105% (as of Feb. 4, 2020). 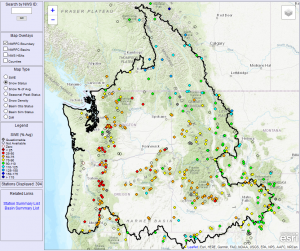 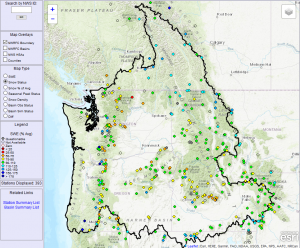 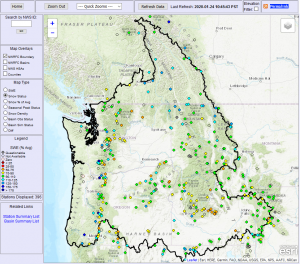 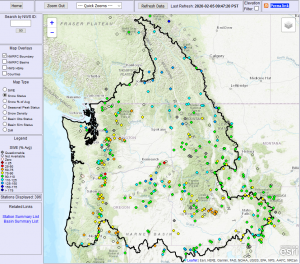