Effects of Petroleum Spills on Fish

The Exxon Valdez spill in Alaska and the Deepwater Horizon spill in the Gulf of Mexico are examples of the diversity and differences between petroleum spills into waterways, yet these spills and others give us insight on how to deal with other spills, how to cope with them, and what to expect.

Subsurface species are threatened by “sublethal” exposures, and embryos are 2-3 orders of magnitude more sensitive than older life stages. While the sensitivity of tuna embryos from the Gulf of Mexico do not have direct applicability to the Columbia River risks, they are informative of the general sensitivities of the embryos from species specific to the Columbia River.

In the study Deepwater Horizon crude oil impacts the developing hearts of large predatory pelagic fish, published in the Proceedings of the National Academy of Sciences of the United States of America, John Incardona and his team researched the adverse changes in heart physiology and morphology when exposed to oil-based pollutants. These changes lead to acute and delayed mortality to the fish exposed to the pollutants. The images below highlight the developmental differences between the non-exposed (control) and the oil-exposed embryos. 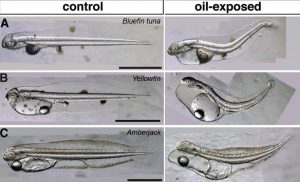 In the video below, two embryos (yellow fin tuna, from Incardona et al. 2014) are shown in sequence. The first embryo (tagged “control”) has a heartbeat rate with a good, steady rhythm. The second one shown is an oil-exposed and damaged embryo. The damage does not appear catastrophic, however note the edema around the pericardial sac of the heart. The heart rate of the exposed embryo is much slower. Because the heart is affected, there are many down-stream effects. The net result: this animal, if it survives to be a juvenile, is less fit. (The video cycles between the control and oil-exposed fish twice in the video.)