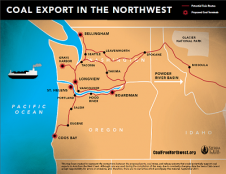 Of the six proposed loading facilities, three are along the Columbia River and all would run trainloads of coal next to the Columbia or Snake rivers during part of the transit.

Three proposals are being considered that would transport coal through the Columbia River Gorge to be shipped to Asia, potentially affecting the river and tribal treaty fishing activities.

The tribes support smart energy development in the Columbia River Basin and has made it a priority to reduce the energy demands on the backs of fish and wildlife. Three new proposals to export coal using the Columbia River Gorge as the transit route challenge this vision. All of these projects will affect the Columbia and those who depend on it, creating environmental injustice as the burdens of the projects fall on those who will reap the least benefits. The issue has enough potential to harm tribal treaty rights that the Yakama Nation has taken a position against these proposals and the Umatilla and Nez Perce tribes are in the process of taking a similar position. 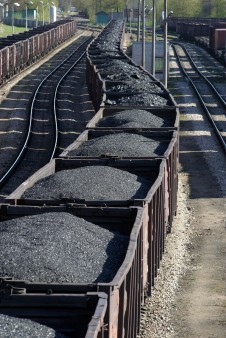 On average, coal trains are a mile and a half long.

The shipment of coal through the Columbia River Gorge will have negative impacts on the air and water quality of the Columbia River. On average, coal trains are a mile to a mile and a half long, and the cars run uncovered. Coal companies spray the coal with a soap product that works to keep the dust down, but coal dust can be a problem in the intense Gorge winds after several days of travel and settling.

The shipment of coal through the Columbia River Gorge would also require new construction projects and increased railroad traffic that would have a direct impact on tribal treaty fishing activities in the Columbia River. The Port of Morrow project would include building a large dock with over 200 pilings in an area where Indian fishers set their nets. Barges on the river currently cause safety issues with fishers, and increased barge traffic would magnify this problem. The other projects will increase the already over-capacity rail lines on both sides of the river with up to 50 new trains a day. The two rail line owners, BNSF and Union Pacific, have each confirmed that they will seek to expand and improve their current rail capacity. This will require them to fill and expand into the river, affecting both fishing sites and riparian banks. The extra train traffic will impede tribal member access to usual and accustomed fishing sites as well as increase the danger of accidents, which are already a problem in the Gorge.

On March 25, the Oregon and Washington governors sent a letter to the White House Council on Environmental Quality regarding this issue. In the letter, they call into question the pricing of coal and ask for a broader NEPA examination of the greenhouse gas and other air quality effects. An excerpt from the letter reads:

“We believe the federal government must examine the true costs of long-term commitments to supply coal from federal lands for energy production, whether that production occurs domestically or in Asia. We cannot seriously take the position in international and national policymaking that we are a leader in controlling greenhouse gas emissions without also examining how we will use and price the world’s largest proven coal reserves.” 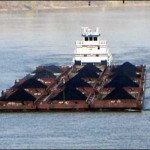 These proposals would include not only rail transport but barge transport as well.

Let your voice be heard

The potential impacts of increased coal shipments will affect tribal members who depend on the Columbia River more than anybody else. Decision makers need to hear from you. Call your state’s senators, congressmen, and governor to let your concerns and opinions be heard.

If you want to protect our natural resources in the Columbia River Gorge from potential impacts of these proposals, contact your state’s federal and state elected officials. Tell them that you do not want coal trains and barges running through the Gorge, on the Columbia River, or near your community or treaty fishing access sites.