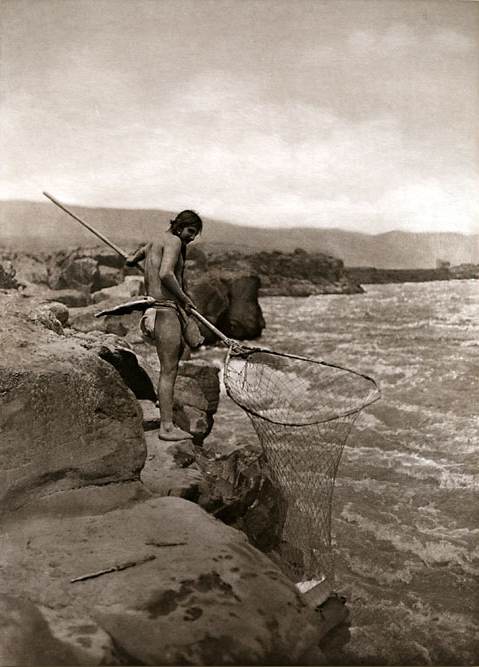 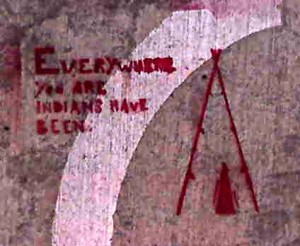 “Everywhere you are, Indians have been.” This phrase captures the simple truth of the history of this land. Every hill; every creek; every meadow; every forest; every river on this continent has a story of its connection to the indigenous peoples who lived here. Some of these stories are still remembered; some are forgotten.

People learn to believe that the history of this land we call home began when Europeans arrived because that’s often where history books start. In one newsreel about the benefits of Columbia River hydropower, the narrator states, “And so for 100 years, the river of the West [Columbia River] was untamed—the same swirling fury which Indians have swept for salmon since the days of Captain Meriwether Lewis.” In one sentence, millions of years that the Columbia had flowed freely and the thousands of years that indigenous people fished for salmon there is swept away. 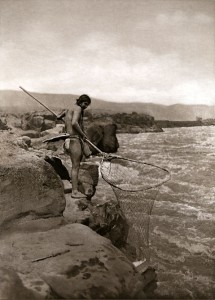 Dip netting near Celilo Falls, where Indians have fished for the royal chinook salmon for thousands of years before Lewis and Clark witnessed it.

Sadly, all that many people know of the indigenous people who lived here before them is what little they learned from the introductory chapter in their elementary school history textbooks. The European arrival in the Americas certainly was pivotal in history, however it was far from the beginning of the story of this continent. For far too long, thousands of years of indigenous culture, history, learning, and wisdom has been dismissed or ignored as prehistory that has nothing to do with today.

For nearly 80 years, the nation has observed Columbus Day to celebrate the anniversary of his arrival in the Americas. The holiday wasn’t meant to insult or demean indigenous peoples; in fact it is almost certain that indigenous voices, views, and opinions about commemorating Columbus were not even considered when the holiday was established in 1907. Lost in the celebration of this holiday was the fact that the arrival of Christopher Columbus represents a terrible tragedy to the continent’s indigenous peoples and the beginning of centuries of unimaginable horrors. Columbus introducing the Americas to Europe forever changed our communities, our families, and the resources that sustained our way of life. This arrival didn’t represent freedom and a new life to the tribes; it represented the exact opposite. It was a day not to celebrate, but to mourn.

Fortunately times are changing. There is a growing awareness that this event is a painful reminder to the tribes. Dozens of cities across the US have recognized Indigenous Peoples Day, not only to honor native people, but also to remove the connection to Christopher Columbus. Actions like this helps with healing as well as promotes a greater societal understanding of the indigenous people who are an important part of our shared American story.

Rebecca Kirt, of the Klamath and Ojibwe tribes, singing an honor song to start the October 7, 2015 Portland City Council hearing to declare the second Monday in October as Indigenous Peoples Day.

Indigenous Peoples’ Day gives us the opportunity to honor the millions of citizens with indigenous ancestry, to celebrate their culture, and to reflect on the evils, sacrifices, and struggles their ancestors were forced to endure. It also gives us the opportunity to educate the citizens about what can be gained by a greater understanding of indigenous history. By learning about the native cultures of this place and what the first residents knew about living here, the country is enriched with a greater understanding of its shared history, understanding of the ecology, and the philosophy of stewardship that could help heal the nation’s and planet’s environmental woes.

The land upon which this nation is built molded the cultures of the tribes who called it home, just as it continues to mold the culture of the United States today. The tribes believe that we are of this land; this is true for everyone on earth. For all of us, this land is both the source of our strength and our greatest responsibility. This might be the most important teaching that the modern world could learn from indigenous peoples’ cultures and experiences. Of all changes the message of Indigenous Peoples Day could bring, perhaps the most important would be the realization that the story of the continent’s first residents is part of the nation’s collective story. We are all connected to one another and to this place we call home. 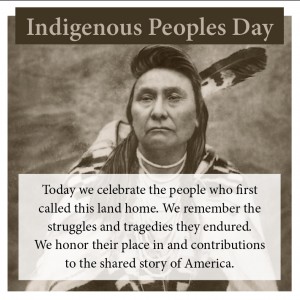