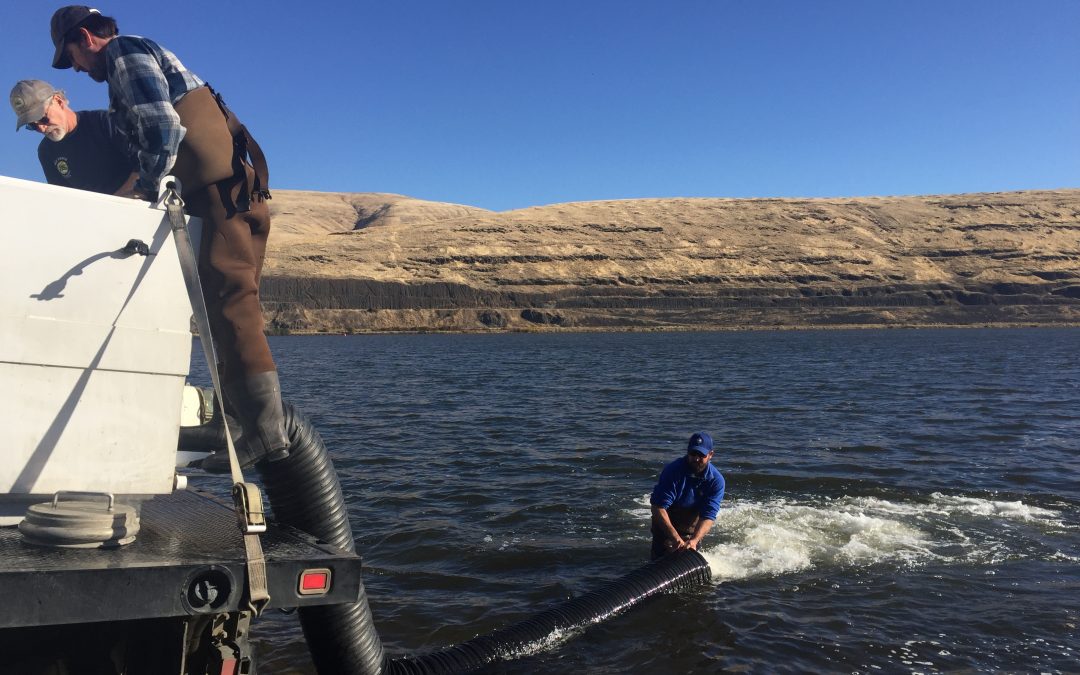 This year’s low number of steelhead returning to spawn are getting a helping hand from the Nez Perce Tribe and the Columbia River Inter-Tribal Fish Commission this week when fisheries biologists are releasing approximately 100 wild, B-run steelhead into the Snake River. Funded by the Bonneville Power Administration, the steelhead restoration project increases adult steelhead returns to the Snake River basin by maximizing the species’ ability to repeat spawn.

The steelhead released today just below Lower Granite Dam were all “kelts”—steelhead that have spawned at least once. They were collected at the dam on their out-migration during spring 2016 and 2017 and transported to the Nez Perce Tribal Hatchery in Idaho where they were nursed back to health. After their 6- to 18-month re-maturation process, the females that were ready to spawn again were transported back to the river and released into the wild.

“With an expected natural return of around 500 female B-Run steelhead, this year’s kelt release will boost the number of spawners in the Snake River 20 percent,” said Doug Hatch, senior fisheries scientist and kelt project leader for the Columbia River Inter-Tribal Fish Commission. “This work is beneficial every year, but absolutely critical in low-return years like this one.”

Nearly all steelhead survive after spawning, but challenges such as river conditions and the Columbia/Snake hydrosystem impact their survival. Only about half of each year’s steelhead run makes it back to Lower Granite Dam, the first dam they encounter on their migration back to the ocean. Only a tiny fraction (about 0.4% of the Snake River run are kelts) survive to repeat another spawning cycle.

“Kelts have always been a part of the ecosystem. Through the tribal reconditioning program we are merely nurturing an existing process to increase natural reproduction and significantly increases a kelt’s chances of spawning again,” explained Jaime A. Pinkham, executive director of the Columbia River Inter-Tribal Fish Commission. “Holding them in hatchery pools shields them from migration-related mortalities and providing them a nutritious and varied diet in low-stress conditions allows them to recover and re-mature.”

“Programs like these that take an innovative approach to recovery are how we, as a region, can make real progress in salmon and steelhead recovery,” said Pinkham.