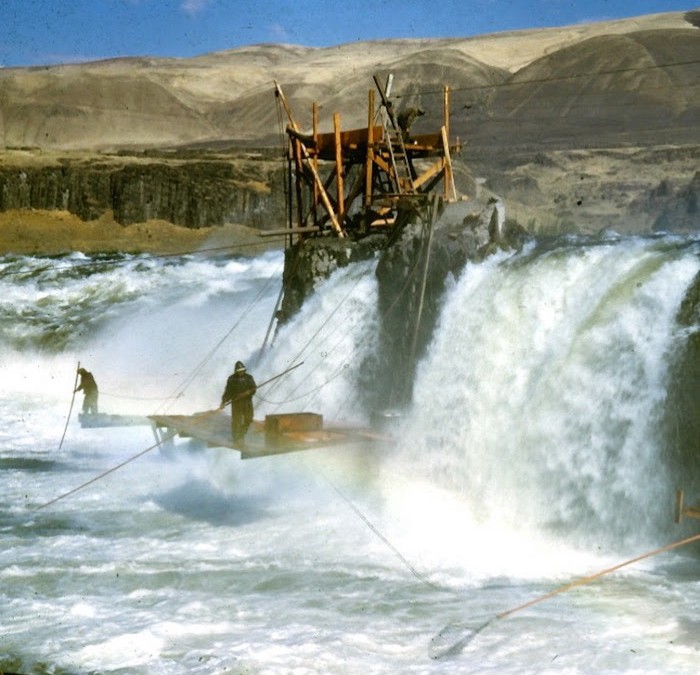 For centuries, the roar of the great waterfall Celilo Falls echoed from the canyon walls near the start of the Columbia Gorge. Celilo Falls made visible the power and majesty of the Columbia River. From these waters, Indians had caught salmon for countless generations.

That world came to an end on this day 59 years ago. At 10:00am on March 10, 1957, the steel and concrete gates of The Dalles Dam closed, choking back the unimaginable force of the mighty Columbia River. Four and a half hours later and eight miles upstream, Celilo Falls, the age-old Indian salmon fishery, was silenced.

The magnitude of loss experienced by the tribes in the region was incomprehensible. Some refused to ever return to the area. For them all, the painful memory was a wound on their hearts that never healed. Most of the tribal leaders at that time have since passed on. But the spirit of Celilo still lives in the traditions and religions, indeed the very souls of Columbia River Indian people.

Today the Columbia River flows silently past this ancient fishing site. The falls’ rugged outcrops and turbulent waters are out of sight; its deafening roar silenced, buried under the waters of Lake Celilo. But the memory of Celilo will always be held in solemnity by the Salmon People of the Columbia River. The residents of tiny Celilo Village still call the place home, continuing the culture, First Salmon feasts, connection to the river, and resilience of those who have dwelt at that spot for thousands of years.

Lean more about the history of Celilo Falls here.