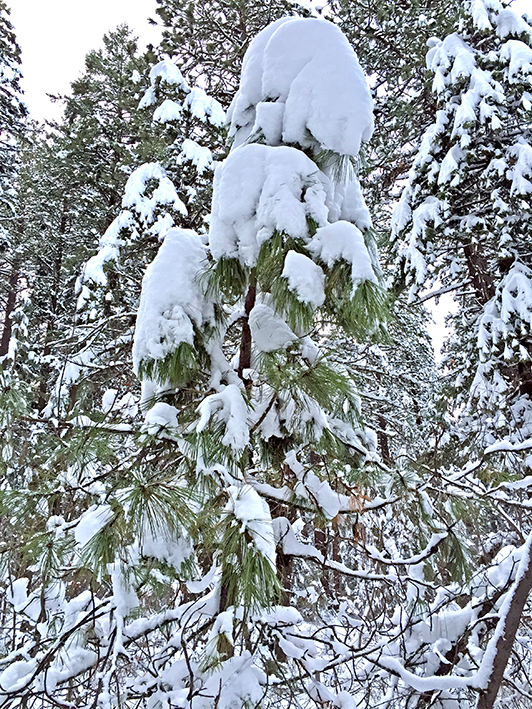 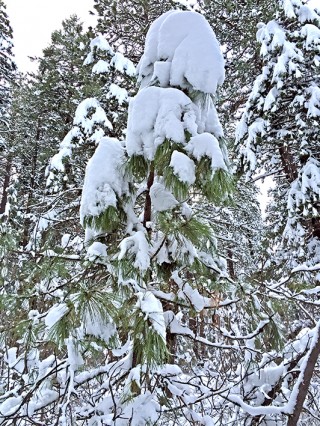 Snow at Deadman’s Pass in the Blue Mountains on the Umatilla reservation. Future models show less and less snowpack as winter snows that provide cold water to the rivers in the summer are replaced with winter rain that runs off as soon as it falls, leaving the rivers lower and warmer in the summer during the salmon runs.

For thousands of years, tribal cultures have been based on the First Foods that each came at their appointed time. Our calendars and travels were based on when these sacred foods—the salmon, the game, the roots, and the berries—were ready for harvest. Now, tragically, changes to the environment due to climate change are already having an impact on the plants and animals of the Columbia River basin. In fact, the tribes are some of the first to have noticed the slight changes that began happening years ago when huckleberries were ripening earlier than anyone could remember or when roots weren’t growing as large as they once had. These changes haven’t stopped there, and are getting more noticeable. We no longer see the deep mountain snowpacks and as a result, the warmer rivers no longer cooled by the cold water melting from them are altering the timing of the salmon return. All of these changes are adding up to a very real threat and danger not only to the balanced ecosystem of the region and the planet, but to the cultures that depend on them, too. Knowing what is happening makes watching these slow changes seem like watching a train wreck in slow motion. CRITFC has been studying climate change and working to predict the effects it will have on the Columbia River basin. By anticipating how salmon and rivers will be impacted, we are providing the tribes with information they can use to prepare for the expected changes. Ultimately, the governments of the world must come together to address this issue, as only by a united, global effort do we have any hope to solve this threat to us all. I am confident, however that the tribes and CRITFC will be strong voices calling for action to protect and restore sacred Mother Earth. Our elders would expect no less from us. Generations yet to come are counting on it. Paul Lumley, CRITFC Executive Director