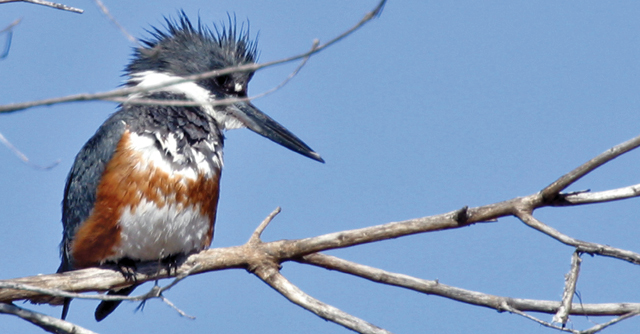 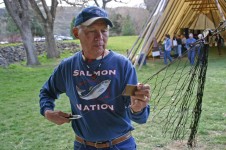 This piece was written in 2004 by Warm Springs tribal elder Terry Courtney Jr., who passed away on June 15. Mr. Courtney served on the Warm Springs Fish & Wildlife Commission, representing his tribe at CRITFC for over five years. His work in service to the tribes ranged from representing tribal issues before Congress to teaching children how to tie nets. His untiring dedication to the cause of salmon and tribal culture will be sorely missed by the Commission.

The slender stalks of grass sway to and fro as a gentle breeze blows up alongside the small creek. Some of the smaller limbs on the nearby trees move ever so slightly, their leaves twist and turn. Farther back into the tree line grows the evergreens and the larger limbs move ever so gently. A lone kingfisher lands on a dead limb of a tall tree watching the water in the creek in hopes of a meal.

The kingfisher felt so sad that even crafty coyote wasn’t around. Where did grouchy bear go? Oh yes, I remember when the family of otters used to play games in pools in the creek. And of course, the trio of bandits, the raccoons, where are they? Let me think who else is missing? Ah-ha—the osprey—they were pretty darn good fishers, too.

It is so silent and it has been this way for quite a few years—decades. Kingfisher is thoughtful. Hmmm! The first to vanish were the beavers. My, my—and they were such hard, energetic workers. After they vanished, so many of the small bugs and water plants also are no more.

Maybe I’ll have to relocate and hope I can find a better stream. I still cannot get over what my parents had shared with me. They said our great grandparents had multitudes of fish, bugs, insects, and different berries. How could that be true? They said the creek used to be much larger, the grasses greener, the shrubbery dense cover for bugs and the fish to hide near, that the trees used to be greener and much larger. They even told of different bands of raccoons, the bears eating the fish; I believe they said the bull trout were water wolves and there were many.

Of course, coyote was always involved. He wasn’t a good fisher but he could steal what he needed, and he did. The eagles and the crows were always competing to get the leftovers from the bears.

Where have they all gone? Was all my parents told me a lie?

I wonder what the grass, the trees, the leaves would say? What would Mr. Creek say? I guess I’ll never understand the truth. What a troubled world, where is my next meal to come from?

I heard one of the crows say that it’s easy picking in the lower country where there are tons and tons of piled up foods. But they also said that too many of them were causing a crowding problem.

My parents said that the big fish in this creek were the key to a better life for all of us. The fish leave as babies and return later to spawn and die, their decaying bodies replenishing the earth, the creek, the birds, and bigger animals.

Kingfisher decides that he will stay where he is. He will live out his life as his parents also did.

Return swimmer, return. I am lonely and I am hungry. My heart is saddened. If only the past could return, or at least a good part of it. Was all I heard, really real?