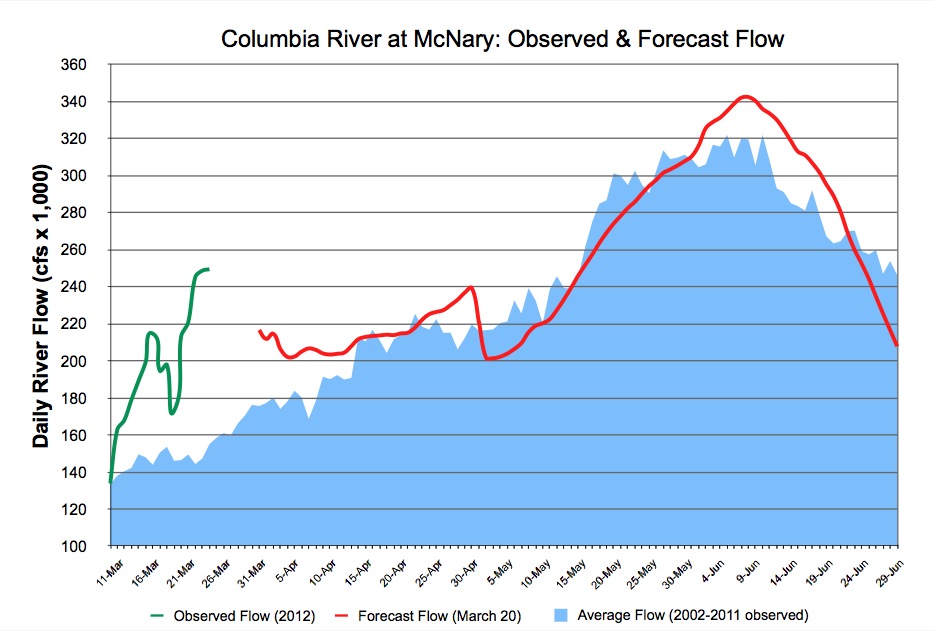 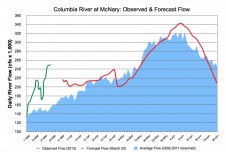 The sharp drop in forecast flow beginning on April 30 is due to annual flood control and Umatilla (90-125% of normal), and measures at the dams. Visit http://www.nwrfc.noaa.gov/rfc/ to see current data.

The spring melt and the high water levels (freshet) it brings to the Columbia River each year makes this time of year particularly dangerous for fishers. CRITFC monitors river conditions throughout the year and creates forecasts to inform fishers of the predicted timing and nature of the freshet. By being informed, CRITFC hopes to not only provide fishers with useful information but also improve river safety.

After a shaky early start of the snow season, we are underway to achieving river flow conditions at or slightly above normal (better yet), which are favorable for juvenile salmon migrating out to the ocean and for returning adults. The NOAA-National Weather Service March 13 river spring-summer forecasts are at 97% of normal. See graph.

CRITFC generates its own forecast, using what is called the multivariable ENSO index forecast method. (ENSO stands for El Niño Southern Oscillation. More on this below.) This forecast predicts this year’s river flow will be 109% of normal.

Snowpack accumulation is good in the Washington and North Oregon Cascades and the Canadian Rockies (110-150% of catching up elsewhere. Current snow levels are at about 1,500 ft.

In the Pacific Ocean, the La Niña event hit its peak in January. La Niña is the cold phase of ENSO, which causes extreme weather patterns across the Pacific for up to 12 months. La Niña events tend to bring higher than normal rain and snowfall plus colder temperatures to the Pacific Northwest during autumn and winter. The enhanced snowpacks that La Niña years bring benefit Columbia Basin fish during the following spring-summer.